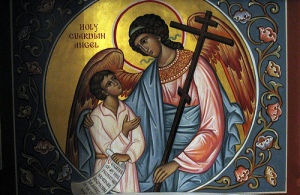 Have you ever seen your guardian angel? I heard mine once, clear as a bell, and it saved my life.

I was in my car, driving home from work a little past 5, northbound through downtown Milwaukee on I-43. Traffic was moving well, about 45-50 mph. Radio on, thoughts random, I was in the middle lane and had just passed through the old courthouse tunnel when all of a sudden I heard a voice say “Laurel! Get in the left lane NOW!” The voice was loud, clear, imperative.  “OK,” I said reflexively, did a quick over-the-shoulder check and swung into the left lane — just as a huge piece of metal on the back the truck I had been following fell off and bounced into the road, right where I had been. It was huge. Would have gone right through my windshield. Talk about chills up my spine! On the drive home, I was in shock, said “thank you” repeatedly, and have told this story countless times in the years since. I am still grateful–both for being saved, and for the chance to hear my angel’s voice.

That saving voice confirmed what I’d felt since early childhood. Guardian angels are real, and I am blessed with one.

Discovering Orthodoxy many years later, I love its breadth, depth and inclusivity, cherishing with great deliberation and heart not only all of mankind and all created beings and matter here on earth, but also that which is beyond space and time. Angels grace every Divine Liturgy, where they are quoted and thanked, their presence visible to all in icons and palpable to some occasionally with prickles on the back of the neck. Prayers to our guardian angels are part of every little red pocket prayer book. And so are parties in their honor. How cool is that?

Every year on November 8 the Holy Orthodox Church celebrates the Synaxis of the Supreme Commanders Michael, Gabriel and Raphael, and of the other bodiless and heavenly orders, the Seraphim, Cherubim, Thrones, Dominions, Powers, Authorities, Principalities, Archangels and Angels.

Some Orthodox prayers sung in their honor:

For a summary of Orthodox teachings on angels see http://www.youtube.com/watch?v=–KyZronQes

We must always remember that we have choices at every turn, and whatever we do, in open or in secret, we do in the presence of our guardian angel. Of that, I am convinced!  According to Orthodox teaching, each of us have been assigned a guardian angel. But it is possible to drive it away by our actions. I’m sure glad I didn’t dishonor or discourage mine, years ago.

Let me know if you’ve ever had an encounter with your guardian angel.

By the holy intercessions of Your Angels, O God, have mercy upon us. Amen.