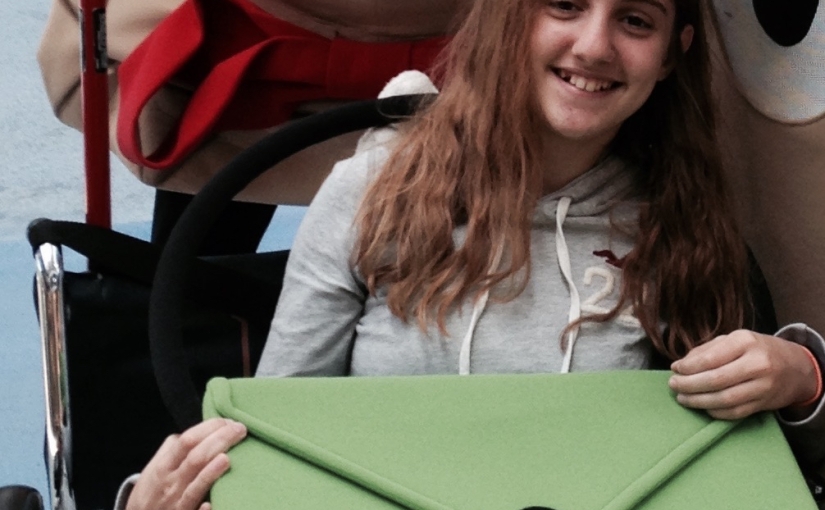 I have romantic notions about crutches.

It begins when I’m 9 with a girl in my 4th grade class who fractures her foot. She can’t walk for a month, and I, in my childish ignorance, envy her. To me, no idea is more fantastic than that of swinging myself around all day, detached from such a mundane task as walking. Why do people even bother with it, I wonder, if crutches exist? Crutches are, in my mind, the best thing man has created, and it simply isn’t fair that they’re only given to the injured and the sick. At 9, I wish to be afflicted by some horrible ailment so that I might be granted use of them.

At 13, being wheeled through Pittsburgh International Airport, I don’t know quite what I was thinking.

In general, lots of things change when you can’t walk. Wherever you go, there seems to be a myriad of people who want to help you, and you’re given perks that you usually don’t want. Airports are no different. I’ve been inside for just shy of five minutes when a member of security sees me and asks me if I want a wheelchair. And I don’t, really, but I say yes, because I need one. Before I know it, I’m being wheeled to the security checkpoint, slinging my crutches across my lap and trying not to draw attention to myself.

The woman pushing me – Carol – is insistent upon engaging me in conversation. She’s an older lady, with gray wisps of hair that catch the light like a halo when she leans over the back of my chair to smile at me. She has the pleasant demeanor of one who’s either perfectly content in one’s life or very, very good at one’s job.

“Were you injured in a sport?” she asks me, and I wish she’d stop talking. “Wait, let me guess. Soccer?”

“No,” I say flatly. I’ve been asked this too many times. “I have fibromyalgia.”

I don’t have fibromyalgia. I also don’t have hip dysplasia or a herniated disc, but if you asked me that’s probably what I’d tell you. It’s easier that way. It shortens the conversation and saves me that confused look when I explain that no, I don’t know what I have, but yes, I’m sure that I have something. In the last four months I’ve found that the two most common reactions to that particular delineation are pity or skepticism, and I’m not in the mood for either today. For my purposes, fibromyalgia works nicely.

We breeze past the line for security. I feel a twinge of guilt as I catch the eye of a woman I’m skipping, but it’s not like there’s anything I can do about it. And anyway, judging by the look on her face, she feels sorry for me; I’m the one who can’t walk, after all. I tell myself there’s no need to feel guilty and put it out of my mind as a tired-looking man with a dull expression helps me out of my wheelchair, has me take off my shoes, and directs me through the metal detector.

“Flying alone?” he asks, his voice ripe with apathy. I think I prefer Carol.

I nod, and though I’m positive he doesn’t actually care, I tell him, “I’m going home from summer camp. I got sick and had to leave early.”

He grunts. “Sorry to hear that, kid. Feel better.”

On the other side of the metal detector, Carol takes me by the arm and guides me back into the chair. My legs have already started to ache and tingle from standing; sitting is a great relief. I mumble my thanks to the man, and we speed off.

For a moment, after I’ve tuned out Carol’s cheery commentary and the commotion of the airport, my thoughts drift back to the fourth grade.

There’s a bitter sort of irony, I think, in getting what you want only when you no longer want it. There’s an odd sort of humor in finding out you were wrong. I recognize myself as a person with the bad habit of wanting things I don’t have, wanting things that don’t always make sense to want, without much regard to how such things will actually affect me. Is it my fault, then, that I got sick? Was there some energy I put out to the universe four years ago that finally came back to me? I think of my nine-year-old self and how all she wanted was to be deprived of a fundamental human function. She was so sure she knew what she was asking for. As we pull up to the gate, my hands clenched into tight fists around the cold metal of my crutches, I want to go back in time and scream some sense into her.

The plane is boarding. I’m among the first to be let on, crutching slowly to my seat and trying not to get in anyone’s way. It’s a cramped cabin, each row comprised of only two seats; the last thing it needs is a pair of crutches cluttering it up. I ask a flight attendant to put them in the cabinet in front.

“Sure thing, honey,” she says, all bright smiles and practiced warmth. “Is there anything else you need?”

Attempting to return her smile, I shake my head. “No, thank you.”

I watch her walk away and tuck my crutches into the small closet next to the cockpit. I watch as she directs a woman to the seat across the aisle from mine. I watch as the woman gets settled, flashing me a quick look of sympathy that makes it obvious that she witnessed my exchange with the flight attendant.

And if I wish in that instant to be nine years old so that these things might at least provide me some sense of satisfaction, it’s only for a moment, and I can pretend that it isn’t at all.

Ghostwriter, Resume Writer, Truthseeker, Planetary Citizen. I am the owner and founder of Write Stuff Resources, a collective of writers interested in helping people achieve life ambitions, through collaborative writing and expertise in publishing and career management. View all posts by Laurel A. Kashinn