Dark force attractions, procrastination, and the heart-brain path to God

What a headline for this post, hey? Bear with me on this one…

A friend of mine of Facebook recently posted a series of very joy-filled messages to his friends, sharing his recent Chrismation into the ancient Holy Orthodox church. He is a very kind-hearted and bright person, and received dozens and dozens of 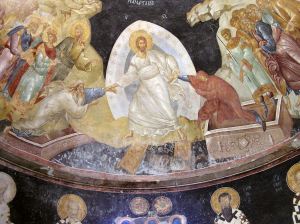 posts from friends congratulating him, being supportive.

This morning, on Holy Saturday, he posted a negative complaint of utter frustration with his own family, who apparently do not understand his journey, and have not been very supportive.

This is so very typical. I know that after I was Chrismated in 1999, I had a similar experience. I had been “high” on my newfound faith, my new discovery of the power of prayer, in love with God and my new church family, when I started having a series of very dark and frightening dreams, almost to the point of nightmare. Also, I suddenly experienced a major break in a relationship with a very beloved in-law family member, which threw me into a state of deep anxiety, self-doubt, anger and depression.

For my friend, for this to happen to him, now, during Holy Week, particularly, is very common. Priests, monks and laypeople engaged in dedicated spiritual practice will confirm that negativity always arises much moreso during Holy Week than at any other time. Every year on Palm Sunday, Fr. Bill reminds us of this in his sermon and shares his strategy of how to be on guard for it. He simply refuses to argue, be critical, or pass any judgment about anyone or anything during Holy Week. Period. If something negative or disturbing comes up, he uses procrastination and puts off dealing with it until Bright Week, after Pascha. He says that invariably, whatever the issue was, it dissolves into nothing by the next week.

Finally, a good use for procrastination! Maybe it could be used all the time! Any time anyone says something negative or you are tempted to get angry or pass judgment or you’re having fears or negative thoughts — just procrastinate. Put off the judgment, the fear, the worry, the concern, to next week.

I’m going to try this!

The reason excess negativity arises during Holy Week, and after blessed events like a Chrismation when we’re most prayerful, filled with light and love and hope, is because the enemy is attracted to the light. Yes, folks, there is an an enemy. He’s been very crafty this past century, getting people to think he’s a myth. What a great strategy for an enemy, hey? The fact is, the enemy is real, he lives in the dark, he has since the very beginning, and he’s always wanting more company, down there in the dark. Maybe the darkness is like a vacuum. This world is in darkness, we were born into. We’ve been mucking around in it our whole lives. And when we finally step out, into the light, maybe we pull some of that darkness along with us. Or the hole we leave behind gets filled and explodes out after us. And it does seem to have a certain kind of magnetism, that wants to drag us back into  the depths of anger, depression, anxiety, uncertainty, fear and other muck that is the darkness. That makes sense to me, as to how it works.

It is said in our faith that the Sacraments are the best way to cleanse us of these negative energies, and I have experienced that to be true.

I, too, have many dear friends and relatives who are hardcore atheists, or claim to be Christian but follow an avowed anti-Christian leader (Ayn Rand), or who are in the space in which I used to be. For decades I harbored grievances against organized religion for centuries of abuse and injustice to innocent men, women and children. I was particularly upset about the genocide of indigenous peoples–the wonton destruction of entire cultures which were peaceful and innocent. Today, a lot of people are very upset by the revelation of years of sexual abuse of children within the structure of one of the world’s major religions. It is completely understandable, and a good thing, to be outraged about that!

What I didn’t understand before I stepped out of the darkness and into the light is that God didn’t do these terrible things to man, through religion. Man did this to man. Religion is like anything – it can be wielded for good, or for evil. To condemn religion is like forbidding the use of cars because people die on the freeway in accidents. Or forbidding people from going swimming because some people drown. Or saying we should have no more corporations because some harm people. (I do draw the line on this analogy to guns. This does not apply because guns are designed for no other purpose than to kill or harm. If guns were built with auto-correction to NOT be lethal, but to only hit extremities, and with safeties that identified the trained user and would be disabled if say, a child picked it up–then I’d reconsider.)

Religion is not the problem. Mankind’s behavior is the problem. In fact, God’s been trying to help us out of this for millennia. He’s sent umpteen saints and messengers. He came down himself to teach us. He dictated an entire Course In Miracles for us to get it.  And still many of us are not getting it!

This culture we are in is ruled by dark side in a multitude of ways, primarily by false egoic identification with form. We’ve come to identify with *things*, losing sight of who we really are, made in the image and likeness of God. Our culture doesn’t support that teaching anymore; on the contrary, it teaches us that we are weak and vulnerable and need to live in fear. That stokes the ego big time.

What I’ve come to realize is that for people to turn, to see the light, what is needed is an experience of something bigger than them, that touches their hearts. Be it a near-death experience, the birth of a child, or something breathtakingly beautiful in nature that God created. Something that diminishes the ego enough for it to get out of the way, and allow the heart to see and to hear, with that inner vision.

That is what what I always pray for people, is for God to touch their hearts that they may see Him. When talking to such friends, I try to get them to just consider the possibility of having an experience like that. For example, musicians can hear harmonies and tones and chords that others cannot, because their ears have been trained. For those with untrained ears, they cannot hear those things; yet that does not mean they do not exist, simply because the untrained ear cannot hear it. If you start to study music, your perceptions change. You perceive sound in new ways. You perceive things you never could perceive before. This is how it is to find God. It is all about, as Elder Paisios of the Holy Mountain said, tuning yourself to the channel of God, like dialing in a radio station. This is why A Course In Miracles includes 365 daily lessons on perception.

God is not an irrational blind belief, which is how many atheists perceive us who are pious. God exists whether we believe in him or not. He does not need us to believe in Him. He does not even need us to worship him. He simply loves us and wants us to find our way home. The worship is for our benefit, not his. Religous practice never was and is not now supposed to be forced on anyone. One of our greatest gifts, which He could have but has never taken back, is our free will. The only way to find our way home is to adjust our perceptions, to tune our hearts, to His frequency, because we want to. This is what ascetical practice is for. This is what the church and its traditions of fasting, prayer and the sacraments are all about — helping us get tuned properly.

Science is just now discovering that the heart contains neurological tissue on par with the brain.The heart is not just a pump–it is a sensory organ and a brain, processing information it receives from the world. This is good news, because God can only be experienced through the heart-brain, not the head-brain. More and more people, through the pursuit of science, will begin to experience His presence. I believe that to be true. To hear, feel, see, and get to know God, it takes training and practice, just like anything else. The Orthodox have preserved, in Christianity, the ascetical practices the best.

The Orthodox have also retained the translation of Christ’s teaching, at the last supper. To paraphrase the Greek, for which there is no English equivalent, partaking of the sacrament of the bread and wine, of the Eurcharist Supper, is the way He told us to “call him back” to us. It is much more than simply “remembering” him.  This is why the Eucharist in the Divine Liturgy every Sunday is the highlight of an Orthodox Christian’s life, and why every Divine Liturgy is like a little Holy Week and Pascha, or Easter service. He actually comes into the bread and wine, he becomes, again, a sacrifice, so that we may be healed or our negative afflictions, and live in the light.

So, if you’re having a great day, don’t be surpised when seeming “bad things happen.” Stay in the light, don’t get sucked in, by simply procrastinating on it. And remember that the path God is through the heart, not the head.

Was that too convoluted?

← Angels and the Fullness of Faith
Stories and Spiritual Athletics →